I hope all of my readers who celebrate Christmas have had a merry one (and a gay one if you desire).

To make up for the late Christmas greetings I though I’d share a photo of an enormous Christmas tree with you which I spotted in the Netherlands: 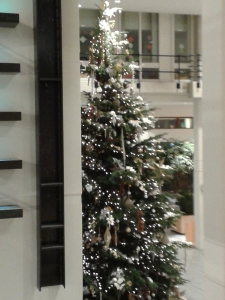 I’ve been with my family over the holiday period and so have the vast majority of my friends.

In Britain Christmas (or unwrapping of presents) is celebrated on the 25th December in the morning – the younger the Christmas participants are the earlier the unwrapping in general. The british Christmas food is more often than not a roast.

Though I’m keenly aware that not everyone celebrates on the 25th December. In Germany and to my knowledge in Denmark as well festivities start in the evening hours on the 24th December which include the unwrapping of presents. A Japanese friend of mine has told me that Christmas (incl Christmas tree) is celebrated in Japan by many people despite the country’s predominant non-Christian background by having a good meal with family but the exchange of gifts & presents is reserved for new year’s eve.

From what I’ve also heard Christmas is often celebrated with barbeques in both Australia and South Africa. Though a former colleague of mine from South Africa celebrated or had to celebrate Christmas the British way (including the roast and the Queen’s christmas speech which I personally have never watched) despite living in South Africa. Apart from being vegetarian I can’t quite imagine to eat the “heavy” European Christmas foods in the summer heat.

Are there any particular Christmas traditions in your country or region? – I’d love to hear about those.

Everyone has an opinion. What's yours? Cancel reply